Tom Wessels on Self Organization

This passage from J. Krishnamurti has moved me deeply.

I maintain that truth is a pathless land, and you cannot approach it by any path whatsoever, by any religion, by any sect. That is my point of view, and I adhere to that absolutely and unconditionally. Truth, being limitless, unconditioned, unapproachable by any path whatsoever, cannot be organized; nor should any organization be formed to lead or coerce people along a particular path. ... This is no magnificent deed, because I do not want followers, and I mean this. The moment you follow someone you cease to follow Truth. I am not concerned whether you pay attention to what I say or not. I want to do a certain thing in the world and I am going to do it with unwavering concentration. I am concerning myself with only one essential thing: to set man free. I desire to free him from all cages, from all fears, and not to found religions, new sects, nor to establish new theories and new philosophies.

I have questions and feel there are answers here, in me.

Email ThisBlogThis!Share to TwitterShare to FacebookShare to Pinterest
Labels: inspiration

Being Seen by the Future

Visual storytelling by Benjamin Dennis. A needed balm for my sorrowful bones.

Email ThisBlogThis!Share to TwitterShare to FacebookShare to Pinterest
Labels: herstory

Logic's Child is not Real

These are just some thoughts I had about becoming a death doula, which coincidentally fit really well here!

There is a whole cult of logic worshipers out there, destined to meet their end. I'll be there waiting for them.
~death doula

A Death Doula for the living, in the process of letting go, or dying to an outmoded model of reality that we have shared for a long long time. A new story emerges here. The story of the end of the purely rational, of logic alone in the world, as it meets its expansion and inclusion into oneness, again.

The basis of all life is thought to be a triangle. This is the irrationality of nature. Logic is linear. Logic resides within life and defines life, but is not life itself. It is a part of life.

The basis of life, however, is a circle. There is no beginning and no end. But! in the triangle, there are three basic points to reference what life is for thought to process, or cycle through. Getting out of linearity helps to make sense.

I am reinventing the wheel here. The categories of life that we often play roles in, such as work and leadership, or vocation, love and relationships, spirituality, finances et, are of little concern in the new paradigm. Creativity requires a new pattern to emerge that may or may not include these roles. I'm sure that family and relationships will be a major part of the new and emerging patterns, but domestic bubbles, and nuclear families may not.

Finances, money and work will all change or morph into various types of self expression fulfilling needs on some new level which is still relational, but not isolated from those relationships.

Spirituality and science will stop chasing each other's tails, but will inform each other in ever new ways.

Value will no longer be defined by universal consensus, but be self determined as well as be a part of a sorting process that generates and regenerates cycles and groupings into and out of formation in a more fluid manner.

Life will be seen in a broader three dimensional space rather than in fixed and static points. There will cease to be a point. To anything. Instead there will be a perspective on a broader whole. At least three points of reference will define every view, micro and macro, self and other. People will reference two of those points from within themselves; the past and the present. The third will be in a direction that is neither of the others.

How we determine value will be based on quality rather than quantity, which will be a method of propulsion that does not require force. All the qualities in nature are necessary.

We've already been in a period of broadening diversity. Units of measurement are unnecessary for our survival and fulfillment and to sustain ecosystems. Ecosystems will sustain themselves, as they have always done. We will learn how to not interfere, face our fears and not only survive, but thrive, along with everything else. We won't need to monitor or manipulate this process. We dance with it.

Much more liberty and freedom will be available to all sovereign forms, including plant, mineral, animal.

What we don't know we ask. And then we listen.

Value judgements on qualities will cease to exist, or be of any importance in a central way, except to those units who choose them, or deem them necessary to their function. ie child development.

It's a good day to die! (which means live as if every moment may be your last) 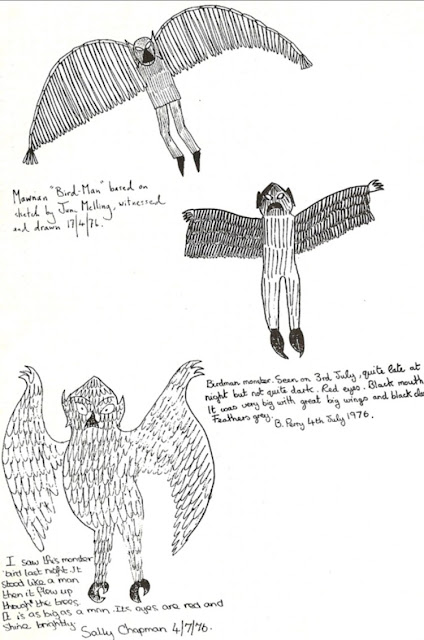 I love hearing tales from The Cornish Bird Blog(man)!

In this one The Owlman of Mawnan Smith a tale that has been repeated several times tells of a large greyish silver bird resembling an owl, with red eyes and huge claws, half bird / half man has been spotted over the years!

In one telling a scared eyewitness says

The time was 15 minutes after 9, more or less. And I was walking along a narrow track through the trees. I was halted in my tracks when about 30m ahead I saw a monstrous ‘Birdman’ thing. It was the size of a man with a ghastly face, a wide mouth, glowing eyes and pointed ears. It had huge clawed wings and was covered in feathers of silver grey colour. The thing had long bird legs which terminated in large black claws. It saw me and rose, floating towards me. I just screamed then turn and ran for my life. The whole experience was totally irrational and dreamlike.

I think I must somehow go to Cornwall and see for myself. I believe this is my nemesis!