I'm reluctant to talk about my knowledge of the tarot because really, who's listening? There are hundreds if not thousands of new age sites out there giving you free tarot or psychic readings, telling you to record your dreams and wrap your pillow in lavender for a stress free sleep, to meditate on the good things in your life and stop being negative etc etc blah blah.

Darkness is often represented as a bad thing and at best, something that needs light shed on it. So I'm reluctant to unveil a massive can of worms by beginning a conversation about the dark side of the tarot. But what I don't see out there is anyone else talking about it. Just in pictures. And this is important. I feel there needs to be a voice coming from the darkness that knows what it's talking about. So what the hell.

I have been attracted to the darkness all of my life. At the same time, I have trivialized it by going rogue hippie on it for a longish period. I blame this on fear. It was easier to smell the roses, get high and chill, than to really look at myself or the feeling I had of being powerless to do anything about a corrupt system that I myself was part of. But I have those days to thank for my study of tarot. But that's where the relation between tarot and hippie-dom end, at least on this blog.

I've studied the tarot for over 20 years. It's probably close to 23, but who's counting. I no longer read the cards via the little booklets that come with the deck, nor do I often refer to the larger compilations of wisdom put together by other tarot experts. But don't get me wrong, I have read them. I've internalized the tarot's universal symbolism. Enough. I chatter. I reluctantly begin my expose of the symbolism of the tarot.

And so it begins,
in the darkness,
there is a spark: 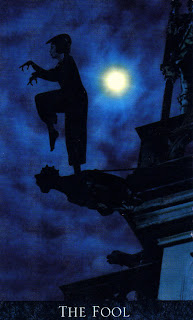 The Fool is unprecedented. He can be man woman or atmosphere of complete openness. There are no expectations inhibitions or obligations and a minimum of direction. The Fools only possessions are the facilities he is born with including a natural curiosity.
If you draw The Fool expect a clean slate, freedom, lack of direction, uninhibited and carefree action or non-action, foolish or mindless behaviour and/or spontaneity. 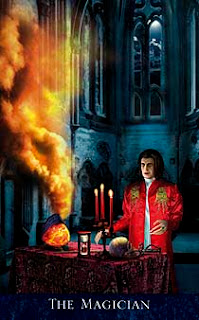 The Magician represents the masculine or active principle of construction, an outward focusing power. It is an awareness of our inherent physical and mental abilities, the resources and structure of the material world and our power to manipulate and shape these things. The Magician is represented by the number 1 because his focus is central and without attachment or cooperation with others.
If you draw The Magician it can mean self empowerment, action, and/or creativity. 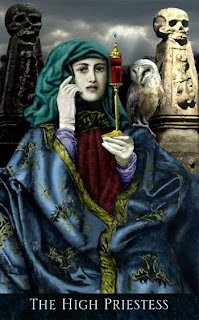 The High Priestess is the feminine or inactive principle of intuition, an inward focusing power. It is an awareness or knowing that originates in the spiritual dimension of our being. It is often referred to as a connection to the unknown world within and around us that is often rewarded with wisdom and direction. This connection with 'other' is what grants it the number 2.
If you draw The High Priestess it can mean a time of turning inward for reflection, intuition, inaction, seeking wisdom and/or piety. 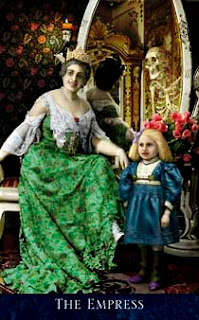 The Empress represents the feminine principle of receptivity. Her openness allows the earth's natural abundance to flow freely to her and through her to others. She is both a mother and a lover and is genuinely caring. The Empress can be equated with the earth in that everything we need to survive is available to us as our natural birthright.
Drawing The Empress will generally indicate abundance, love, reciprocity, creativity, nurturing, generosity and/or sexual energy. 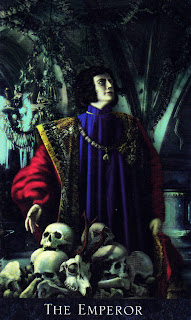 The Emperor is a natural manager and governor of resources and people. He is also a natural problem solver, organizer, coordinator, and protector. He represents the masculine principle of expression through logic and service and people often turn to him for leadership.
If you draw The Emperor expect activities to progress in an orderly fashion, good management, problems solved, career advantage, governance, structure and authority. 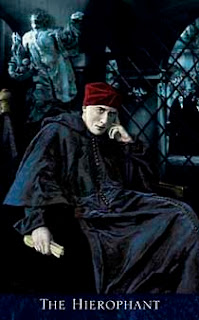 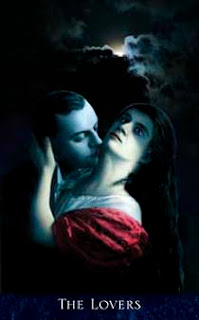 The Lovers is about connection on a spiritual mental emotional and/or physical level between two people. It is most often thought of as being a man and a woman in a traditional sexually active relationship, but it can also indicate any type of meaningful connection between people.
If you draw The Lovers it can mean love, harmony, friendship, marriage, relationship, sex, or other deep human connection. 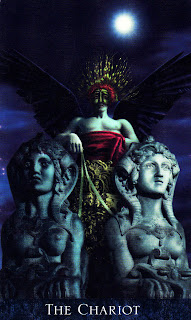 The Chariot is about power and control over oneself and the immediate environment. It is often considered a card of success for if we can master ourselves we can achieve many things. The Chariot can also indicate travel and moving beyond one's immediate realm.
If you draw The Chariot it can mean success, power, achievement, control and/or travel. 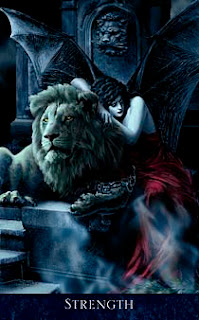 Strength, like The Chariot, is about power and control but in a very personal way. While The Chariot is about managing a situation or environment and attaining victory, here the victory is conquering ones personal fears. The traditional image on this card shows a woman walking right up to a lion and opening it's jaws, as if she shows no fear towards the wild beast. The fears are present and real, but Strength gives one the courage to face them. This card draws on an inner strength that comes from the heart.
If Strength appears in a reading, take heart and find the inner resolve to face the fear holding you back. 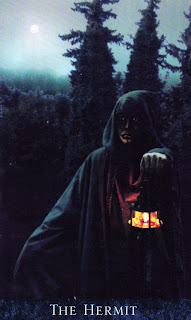 The number 9 represents completion and The Hermit completes the first cycle of the major arcana dealing with the basics of the human journey; getting to know one's self, survival, intimacy and community. This is a card of withdrawing from the world of mundane things where contemplation of the spiritual begins in general seclusion. Many people complete their lives at this stage and never move onto an understanding of the more complex issues covered in the remaining cards of the major arcana. Here The Hermit decides what to do with what he has learned.
Other meanings associated with this card are wisdom, guidance, a teacher or master, an inner journey, making a decision, and/or getting advise. 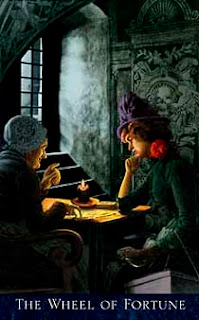 10 THE WHEEL OF FORTUNE

The number 10 signifies a turning point. The Wheel of Fortune represents forces beyond our control. This card is often associated with the eastern philosophy of karma as in you reap what you sow. The Wheel of Fortune predicts a shift in fortune, however, there is no way to predict the results of future events from past actions. The outcome will be what it will be and we simply have to accept that there is nothing we can do to change it.
If you draw The Wheel of Fortune you may be looking at divine good fortune, a turn of events - for better or worse, luck, opportunity, fate, miracles, or destiny. 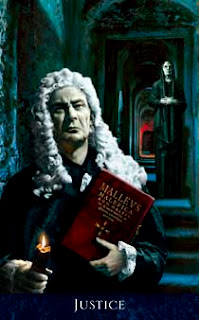 Justice is a card of balance, and also of karma, but in the way of human societal law, as opposed to divine law as we saw in The Wheel of Fortune. As social creatures, humans have developed a system of law and order that lets us co-operate effectively amongst ourselves. Outcomes can be predictable and controlled and will be kept in balance. 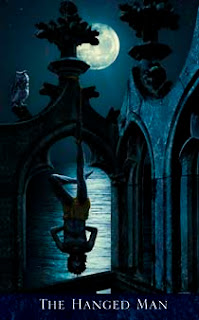 Although the image of The Hanged Man seems to be about death by hanging, it actually means letting go of control and allowing the situation to sort itself out without your intervention. In peaceful suspension The Hanged Man takes time out from active participation in life, ceasing to struggle for or against the current circumstances.
If you draw The Hanged Man step back from the situation and withhold judgment and /or participation for now. Other possible meanings include waiting, acceptance, sacrifice, reflection and surrender. 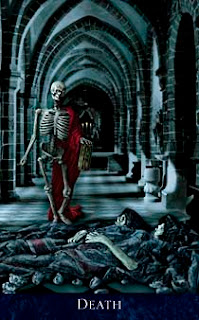 Everybody's favourite, or not, Death is the most infamous card of the tarot. More often than not it means change and not actual death although the results will be the same; something that was once meaningful will change forever. The word absolute represents this card perfectly. Whatever happens things will never be the same.
If you draw Death in a reading expect big changes, an ending, a clearing away of the old to make way for the new, death, conclusion, or a major change in attitude or circumstance. 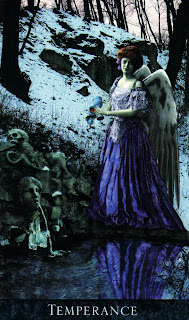 Although there is a sense of justice in Temperance, the meaning of this card suggests moderation, balance, and blending of opposing influences. The old and the new, age and youth, strength and weakness, wisdom and ignorance, anger and love, all these things combine changing black and white to grey. Where once there was harsh contrast Temperance brings gentle harmony.
If you draw Temperance in indicates a need for tempering absolute judgment and seeing the value in both sides of a story, taking the middle road, not going to extremes, seeing the other side of the coin, or joining forces. 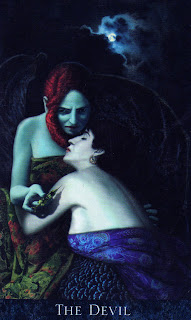 The message of The Devil is that his control over us is an illusion. He represents all those things about ourselves we do not like; addictions, over-indulgence, lying, cheating, mistrust, betrayal, greed, lust, shame, and lack of control. The Devil's illusion is a living Hell. That which we do not accept in ourselves chains us to Him. The greatest misfortune accompanying The Devil is the illusion that he is in control of our lives and we are not.
If you draw The Devil ask yourself whether you are in control of the situation or whether you are giving your power away to someone or something else. Other possible meanings: unfairness, promiscuity, dependence, negativity, selling out on your true desires, accepting less than the best, wanting something that you know is not good for you, denial. 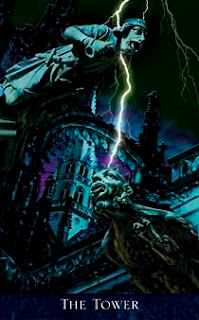 The Tower shakes things up in a big way. The Tower represents our illusions. The lightning striking The Tower shatters our illusions shocking us into reality. It is usually unpleasant and disruptive, breaking the very fabric of our lives. However it is always for the best. In the long run no good can come from a pipe dream or living in a false tower of hope.
If you draw The Tower it means the foundation of the situation will crumble, major disruption, major change, seeing another point of view for the first time, shocking news, and losing control. 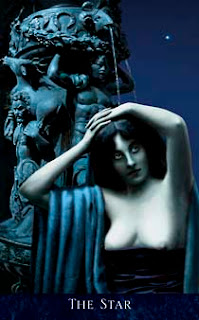 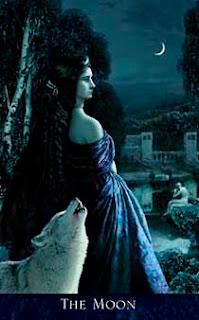 The Moon represents our unconscious. It is that part of ourselves which is primal in nature and is hard to logically interpret or even to access. It can influence us in ways we don't understand and indicate times of confusion or uncertainty.
If you draw The Moon expect fear, mystery and/or fantasy. 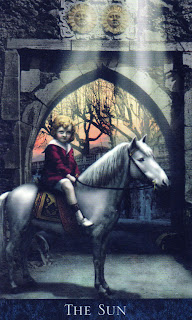 The Sun is positive energy. 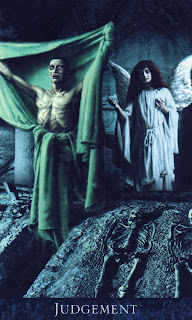 Judgement is a card of rebirth and second chances. It is called 'Judgement' because it is a time to make major decisions which must be made using our own wisdom and judgment. It is sometimes referred to as 'The Calling' because it tells us that something meaningful to us is at hand. It is generally a rare opportunity that comes only after many trials and tribulations.
If you draw Judgement it can mean getting a second chance, an opportunity, or a decision. 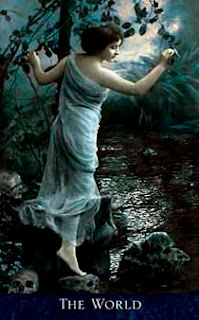 The World represents a completed cycle and achievement of one's goals.

The cards displayed above are from the Bohemian Gothic Tarot produced by Magic Realist Press.