The Ancestors Are Us

Remembering those, on November 11, 2020, this image came to mind, as I went deeper into remembering those who gave their lives, not only in the last two world wars, but all those who came before us. 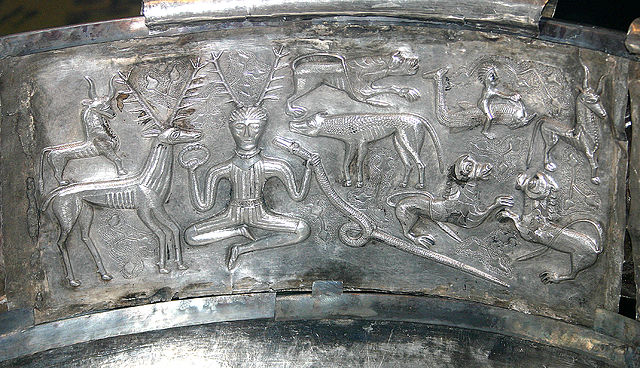 Of course they knew, the ancestors, they knew very well who they were. They knew they were both the foundation and the frontier of conscious awareness. I believe they set this up, like Bonnita Roy says in her ‘The Hollow’ series of talks at the Stoa, via dispatches to the future.
I see the figure on the Gundestrup cauldron sitting with a torc and a snake in his hand, horns coming from his head. That is a message. A message that says something, not in words, but in mythic imagery, the meaning behind the symbols. He is saying something along the lines of growing minds - the antlers, emotion, movement - the snake, and a gold torc which generally is worn around the neck made of twisted metal. The fact that he is holding it, as well as wearing it, points to its significance. He wants us to pay attention to it. On the cauldron the gold colour is not apparent, but as artifacts they were often made of twisted gold. Gold is not just valuable, its long lasting, its endurance reminiscent of the nourishing radiance of the sun, of warmth and expansion. It’s like they wore it around their necks as a talisman, an indication of their intention to grow their minds. That is their message to the future, to their future selves. Us.
I’ve said this before, but perhaps never written it down. I feel like I’ve been underground for three thousand years and I’m now being recalled to the surface because I’m needed. Because the ancestors are calling to me from long ago through the images on the cauldron and through my DNA, the historic memory I carry in my architecture. I put my past together with the present using my imagination, both sides of my brain articulating together in thought and word, in language, the depiction of flowing form, something like the snake.
The cauldron itself is the container, the body. The intentions of it are depicted in the images on the surface. The whole thing is a metaphor for ourselves.